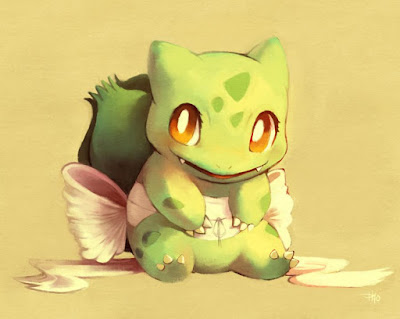 My boyfriend just sent me this adorable picture on Facebook! If you don’t know what it is, congrats! You have a life. Just kidding of course! It’s a type of Pokemon called a Bulbasaur. Oh, did I mention I’m also a nerd? I guess the secret’s out haha. For our anniversary a few weeks ago, he bought me the new Pokemon White Version videogame and I cannot WAIT to play it over the summer!!! Just last month I beat the Heartgold Version, so that was exciting 🙂 Sorry if all of this is like another language to you guys…. But I can’t be the only one right? …Right?

I swear I have the most random dreams sometimes. Last night I dreamed one of my aunts took me to a fancy restaurant (and I mean, fancy) and I found a hair in my food. Gross! I wanted to tell them to take it back, but my aunt was like, “no that would be rude!” So I, against my will, just kept it haha. Would you keep silent if your expensive meal had a hair in it? I wouldn’t! The next thing I remember about my dream was trying to go to sleep while a cat kept clawing and scratching me everytime I would doze off. Now keep in mind, I don’t own a cat. I never have. To be honest, I’m a dog person. So, why am I dreaming that I have a cat?! Who knows haha I think dreams are so interesting and peculiar. Some of my dreams repeat while others will continue from where I left off in a previous dream months ago! Weird. What’s one of the most strangest dreams you’ve ever had?

An update on my bucket-list: I’ve reached 75 things. The closer I reach to 100 the harder it becomes to list more things I want to do. I decided that I’m going to start a fresh list with nothing on it I have already done; I guess as sort of a challenge to myself. After going through it, I’ve realized it’s a little hard thinking of things I’ve never done! Which made me happy. I’ve climbed the Great Wall of China, been on TV, met someone famous, got a piercing other than my ears, crossed the London Bridge, ate a scorpion (while I was in China haha), among some other cool things! Still, I will finish this list and in time, I will complete everything on the list. Hell yeah, motivation! hehe.

Lately, I’ve been feeling really uncomfortable sharing outfit posts. All I have is a simple Canon point-and-shoot camera which doesn’t portray a good quality of pictures that I want to share with you guys. So I’ve decided I’m not going to do them until I buy a legit camera which I plan on doing once Summer starts. I’m excited. Any suggestions on a good camera?

Tomorrow is Thursday which means Friday is the day after!!! Hurray!
I learned my days of the week through the Rebecca Black video.