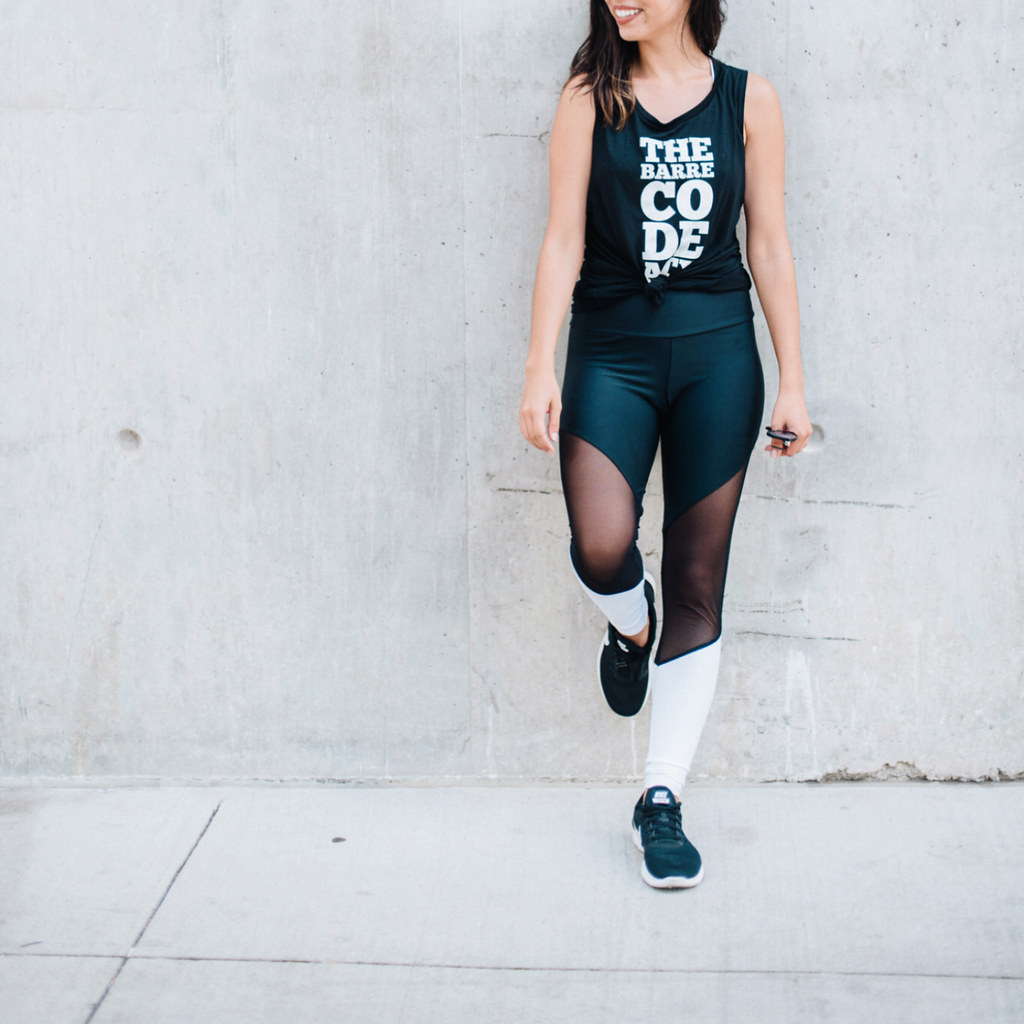 Until this year, I didn’t have a clue what barre was. I heard it involved a literal bar (barre?) in class, and my mind immediately pictured a ballet studio where women just plié over & over. When my friends continued to talk about how great The Barre Code was, I was intrigued, but nervous to try something new that sounded like something out of my skill-set (silly, I know). Then, as if the universe heard my concerns, The Barre Code offered free weekly barre classes at our local Whole Foods rooftop plaza, and I figured this was the perfect chance to finally give it a shot–literally after the first class, I was hooked! The exercises were a mix of cardio and strength training, just what I was looking for (as opposed to my usual jogs around my neighborhood). Afterwards I felt accomplished and motivated again, like I had finally found an exercise method that worked for me! I then got to test their actual studio classes which only made me love it even more (you can read about my first impression here).

Cut to now–I’ve been an ambassador at The Barre Code for about a little over a month, and I can’t tell you enough how great it has been! You can actually feel the progress taking place with each class. If you feel like you’re in a rut with your work out routine, or maybe you’re looking to not only lose weight but incorporate exercises that will help strengthen and tone your body as well, then I highly recommend you try barre. (And FYI to my readers outside of Texas: The Barre Code isn’t only located in Austin!) Ever since I became a barre regular, I’ve been getting quite a few questions and inquiries about it from people who have heard about it but want to know more. These are the questions I get asked the most:

Barre is a full body workout that focuses on proper form, alignment, and posture while increasing strength, muscle tone and stamina. The ballet barre is used as a stability device allowing you to get deeper into the exercises. Props such as hand weights, bands, and balls also help take the movements to the next level–when you feel your muscles start to shake, you’re doing it right. The Barre Code has a variety of different classes, and they’re always changing up the routine–so you never get bored (one of my favorite things about it, tbh)!

No! Although the classes are mostly made up of women anyway. I’d say it’s 98% women from what I’ve experienced. During my entire time spent at The Barre Code, I have seen 2 guys total show up. Sometimes women bring their significant others. It’s never a big deal though! Anyone is welcome. 🙂

YES. If you really give it your all, sometimes you can even be so sweaty you end up dripping on the mat (which is why they clean it in between each class). I always need a shower after barre, so if lack of intensity is your concern–you have nothing to worry about.

4. What’s the actual barre for?

Lots of things! For some strength exercises, the barre is used as a prop to balance while doing exercises that focus on holding your body still while you contract a specific set of muscles combined with high reps of small range-of-motion movements. Your thighs will feel like they’re on FIRE. In a good way. The barre can also be used with resistance bands/tubes for core, arms, and seat (AKA your butt) exercises. It’s awesome!

5. I’ve never done it before; what if I embarrass myself?

Trust me, no one will be paying attention to you because we’re all so ~in the zone~ and trying to focus on getting the movements right ourselves. Plus, the people aren’t the type to judge anyway! No one is perfect. The Barre Code genuinely feels like a small community of women all there for the same reason, so everyone is friendly and supportive of one another. My first time at barre I felt like I couldn’t get the moves down,
and I was worried that everyone noticed–but they didn’t, because people are focused on their own progress. And if you do need help, the instructor is more than happy to personally show you what to do. I still need assistance sometimes!

If you’ve been interested in trying out barre but aren’t ready to commit completely yet, you can take 50% off The Barre Code’s 2 week unlimited classes pack with the code “BARRELATELY” at checkout. Unlimited classes for 2 weeks is usually $80, so with my code, it’s only $40! If you’re feeling unsure or shy to go alone, message me through Instagram, and I’ll go to a class with you (if you’re in Austin, of course)! If you have any other questions about barre, the studio, or the classes, don’t hesitate to message me; I’d love to hear from you!