Island hopping in Thailand. Not pictured: the 30 other tourists behind me.

Fact: you don’t need a fancy camera to get good photos of yourself. Every time I go traveling abroad, I only take my smartphone for photos since I don’t want to lug around my heavy DSLR camera. Are you the same way, or am I just lazy?

I personally believe bringing my giant camera to places with a determination to get the “perfect shot” takes away from my overall experience of traveling and prevents me from truly living in the moment. For others, DSLR photography is important to them, so they don’t mind carrying the burden (literally). To each their own!

This year I went solo traveling for 5 months and was still able to get nice photos of myself with nothing but my smartphone. I was asked countless times, “Who takes your photos?” since people knew I was traveling alone. Point being: it can be done!

Below are my best 5 tips on how I did it and how you can do it too.

Get a Phone TriPod

I resisted buying a phone tripod for years simply because I wasn’t sure if they were worth it, and I assumed they’d be too heavy to carry with me. But I eventually became tired of relying on always needing someone around to snap a pic of me, so I caved. I wanted one that was sturdy, light, and easy to compact.

I invested in this one from a brand called JOBY a couple years ago, and I LOVE it; it still holds up today. It takes a little getting used to, but it’s super simple. It’s so nice to have control over your own photos!

I was recently sent this one by JOBY which is a little more fancy due to its extra socket arms, but I wanted to upgrade in order to have a tripod for vlogging that could carry both my phone and my GoPro at the same time. JOBY actually has got a whole category about vlogging tripods and devices perfect for independent content creators like me!

Applying my devices was quick, plus the arms were a decent length to where I could hold out the tripod in front of me for selfie-mode that was able to fit in so much of the scenery behind me!

I continue to use the aforementioned version of their phone tripod which is a cheaper  option (simply because it doesn’t have the extra socket arms), but they are both great tripod options for vlogging, selfies, and taking your own photos from afar!

I was literally asked by a photographer what lens I used to get this shot; they did not believe me when I said I took it with my iPhone.

Set Up the Shot and Ask Someone Else to Take it

For those times when you don’t happen to have a tripod with you, ask someone else! I usually start by asking THEM if they want their photo taken first; then I politely ask if they could return the favor. I always ask either someone with a nice DSLR camera with them or young girls who know all about getting the right angles.

When I want the photo to look exactly a certain way, I will frame the pic myself before asking someone to take it. I will literally tell them where to stand and hold up the phone in the exact position I want them to use. I’ll usually ask them if they wouldn’t mind taking about 3 shots (nicely, of course).

Sometimes the photo, no matter how much direction you give, still won’t come out the way you want. In which case, just wait around until that person leaves and ask someone else!

Don’t Worry About Others Judging You

I get it… it can be uncomfortable having other people watch you take photos of yourself. But think about it: when you see others taking photos of themselves, are you quick to judge? What’s so shameful about wanting to remember a place you’ve been to or capture a nice pic that you’d like to share? I used to feel like everyone was staring at me when I took selfies, but I think the reality is that they will not give me a second thought once they move on.

I realized that the downside of leaving a place without capturing me in my own photos is greater than the temporary embarrassment I feel from the stares of a few perfect strangers.

Think about it: you are likely NEVER to ever see these people again for the rest of your life. What does it matter what they think?

Not all selfies have to be the same! For the times where you’re completely alone and just want to take a simple shot and move on, you can use the JOBY phone tripod arms to put more space between you and the lens (like a selfie stick, but not as obvious or annoying).

Another option is to buy a wide angle lens for your phone which will take in more of the scenery around you. You can find a bunch on Amazon (I bought this one) that will easily just attach onto the outside of your phone; I keep mine in my bag, but they will easily fit in your pocket. That’s all it takes! 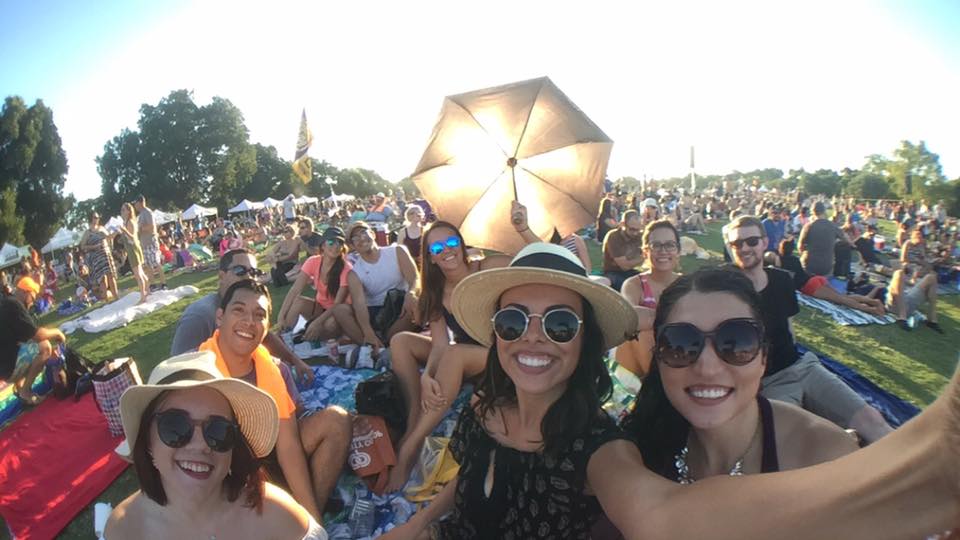 I’m not going to tell you to get up at an insane hour in order to get somewhere by 6am to avoid and sign of other people (unless you’re into that), but even simply getting somewhere sooner rather than later will work wonders. For most places, as long as you show up before 11am, you should be good!

The shot below was taken around 10:30am at a popular “Instagram destination” in Australia that was PACKED with people an hour later. Although the place wasn’t entirely empty when I arrived, all it took was a little bit of patience to get a nice shot without anyone else in it.

No waking up before the sun required!

This post was sponsored by JOBY; all opinions are my own!

If you’re interested in learning more about smartphonography, have a look at JOBY’s phone tripods, they have a whole category for that!